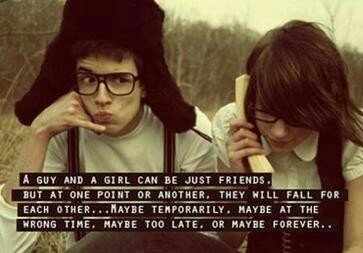 Friends zone is a situation where one member of a friendship wishes to enter into a romantic or sexual relationship, while the other does not. It is also generally considered to be an undesirable situation for the rejected person. Another definition is when you’re madly in love with someone who only views you as an 'Option B' or a bestie also known as best friend.....hmmm, doesn't sound too good right ?

• While some know but they're just hoping the other person will get serious one day.

• For some, they're just going with the flow probably because they're cool with it or just waiting to see where it will lead to.

Whatever category you're in, you're probably in this zone because you're not attractive to the other person or you're in the wrong match or not bold to ask the person, the essence of the relationship or you're just too nice, doing all the work, and investment while the other party is just benefiting and doing nothing.

Remember, relationships can be platonic and lifelong, short-lived and hot, promising and mysterious, romantic and fulfilling. So trust this won’t be your last connection to possible love.

Instead of stressing yourself about this friends zone thing, be honest to yourself, listen to your gut, and then move on because you deserve the best and not to stuck yourself with someone who's not interested in you. xoxo